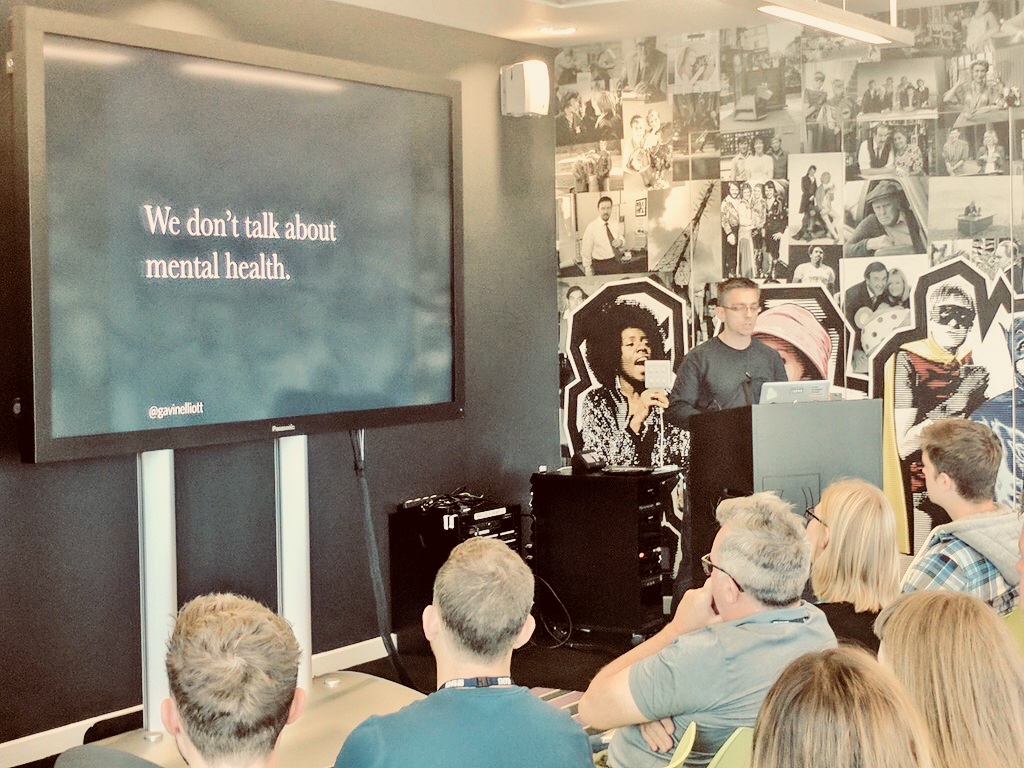 This article will be one of the most important you’ve read about impostor syndrome and mental health in our industry.

It will cover several points;

A recent report published by the Varkey Foundation suggested young people in the UK have some of the poorest mental well-being in the world.

Funding on mental health has dropped over recent years in the UK. Currently, it takes 5 weeks or longer to get a referral to see a mental health professional. Taking that into account, it’s not just our young people who are being affected by the lack of funding and support.

We don’t talk about mental health. Mental health is still stigmatised. stigmatization of mental health challenges is a clear catalyst for a negative impact to a persons well-being.

The topic of mental health is very broad, but there’s one area which affects our industry more than any other. Impostor Syndrome.

I believe that Impostor Syndrome is one of the largest and most damaging challenges we face in our professional lives.

Whilst Impostor Syndrome is not classified as a mental illness or disorder, it is often recognised as a reaction to certain situations – those situations are often amplified in our line of work.

We do nothing to combat it because we end up in a perpetual cycle of fear of not being able to see a way out.

Some of us know exactly what it is.

Some people recognise and suffer from the feelings associated with it.

Some people simply haven’t recognised that it’s a thing as it may be just one or two symptoms that they’re affected by.

I’ve met a lot of people in my time in the industry and there are but a few who don’t suffer from impostor syndrome. Even those that seem like they’re the most confident, once you get them behind closed doors, they’re quick to break down the facade.

There are several traits and behaviour associated with impostor syndrome. If you recognise any of them, I provide a little help to get you through them later in the article.

You have difficulty accepting praise 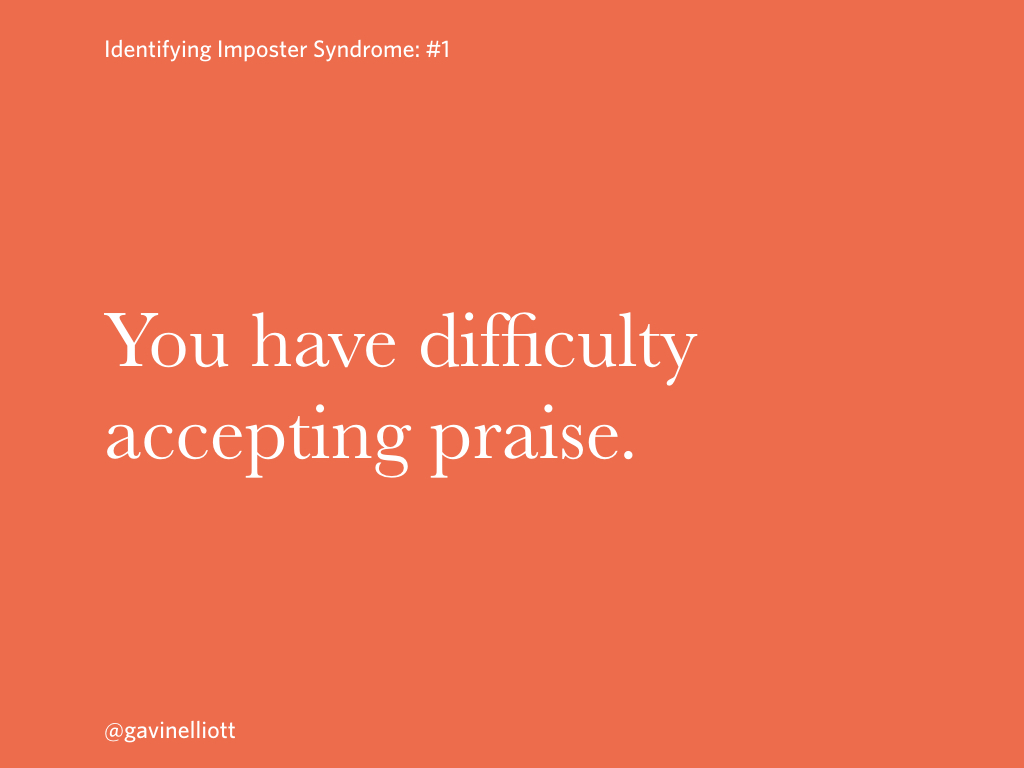 Ever been praised for doing a piece of work only to completely discount the praise you’ve been given? It’s not about being modest with ‘the impostor’, as ‘the impostor genuinely feels unworthy.

You discount your success 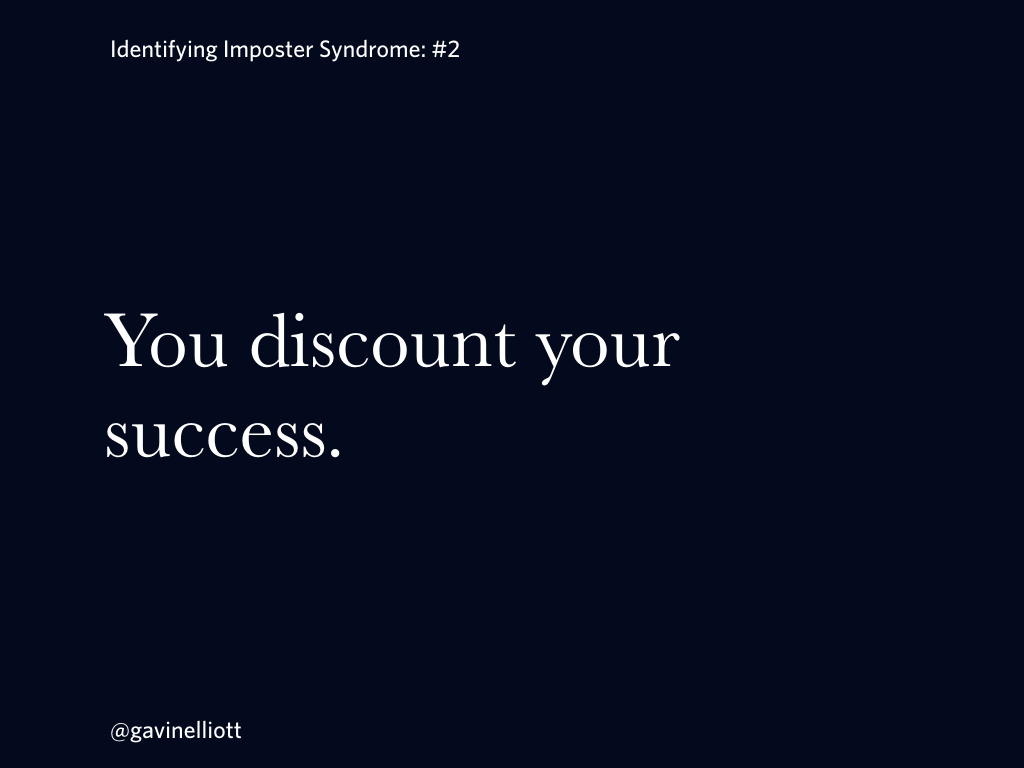 You may have heard yourself say “it wasn’t really me who managed to do something successfully, it was everyone around me”. You push your successes away in fear that it might open the fraud door. 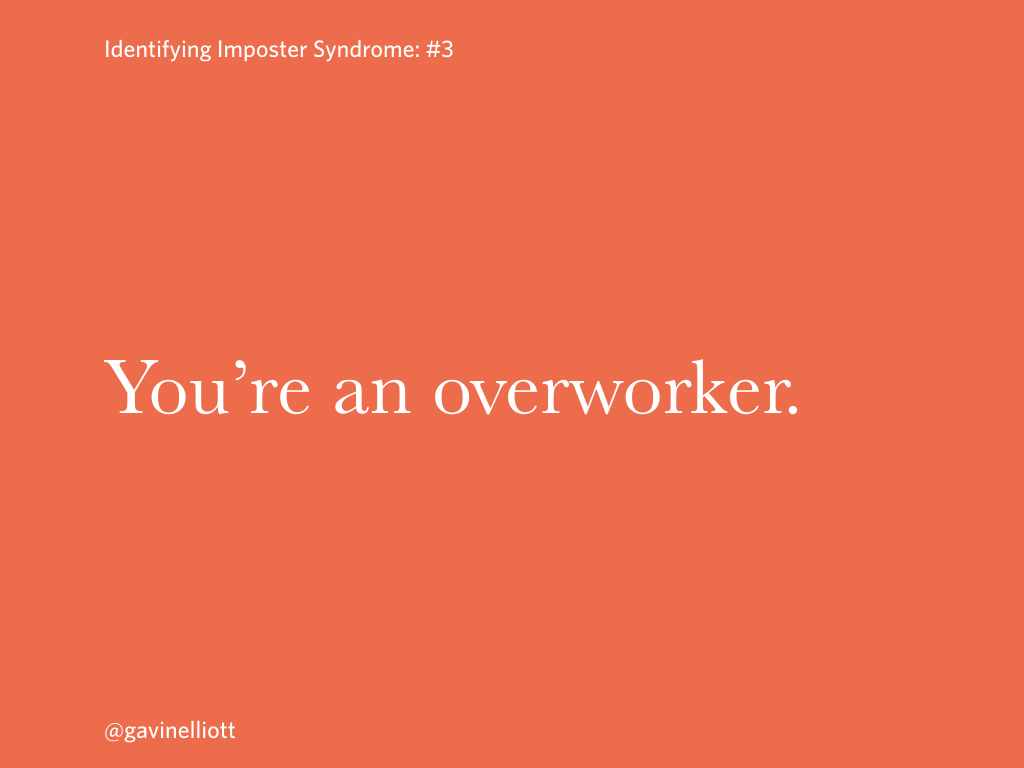 You overwork to prove to everyone around you that you’re good enough or your work is good enough. Working longer hours and running yourself into the ground obviously, means that you’re amazing.

You forget that working smarter is better than working harder.

You have to be the best 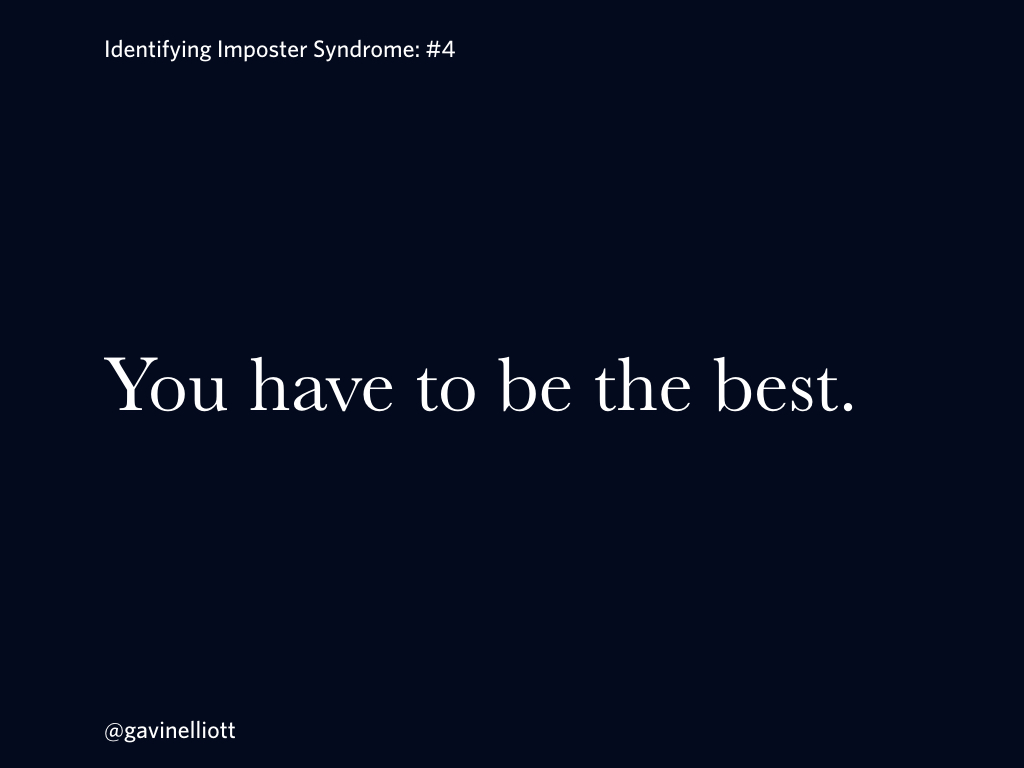 The impostor will not let you be anything less than the best. Now imagine the perpetual cycle of trying to be the best in a world where everyone else also thinks they’re supposed to be the best? 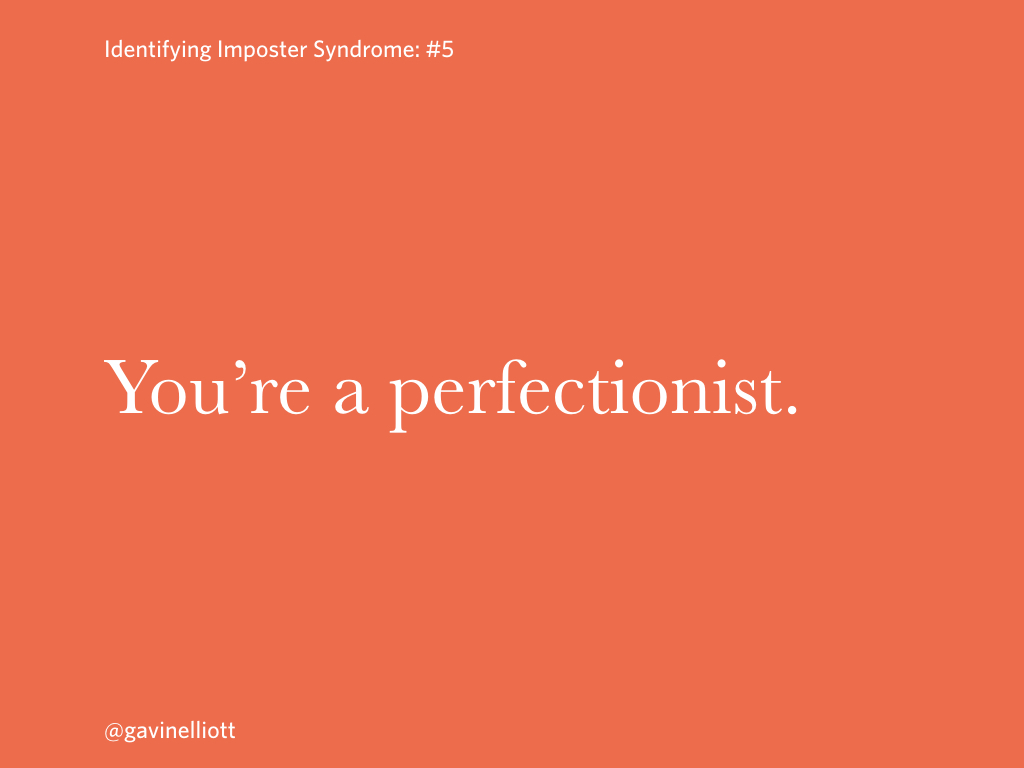 You hold yourself to impossible, unbelievable and often unachievable high-standards.

Everything has to be flawless, anything less is a mark that you’re a fraud.

A mistake makes you feel worthless. 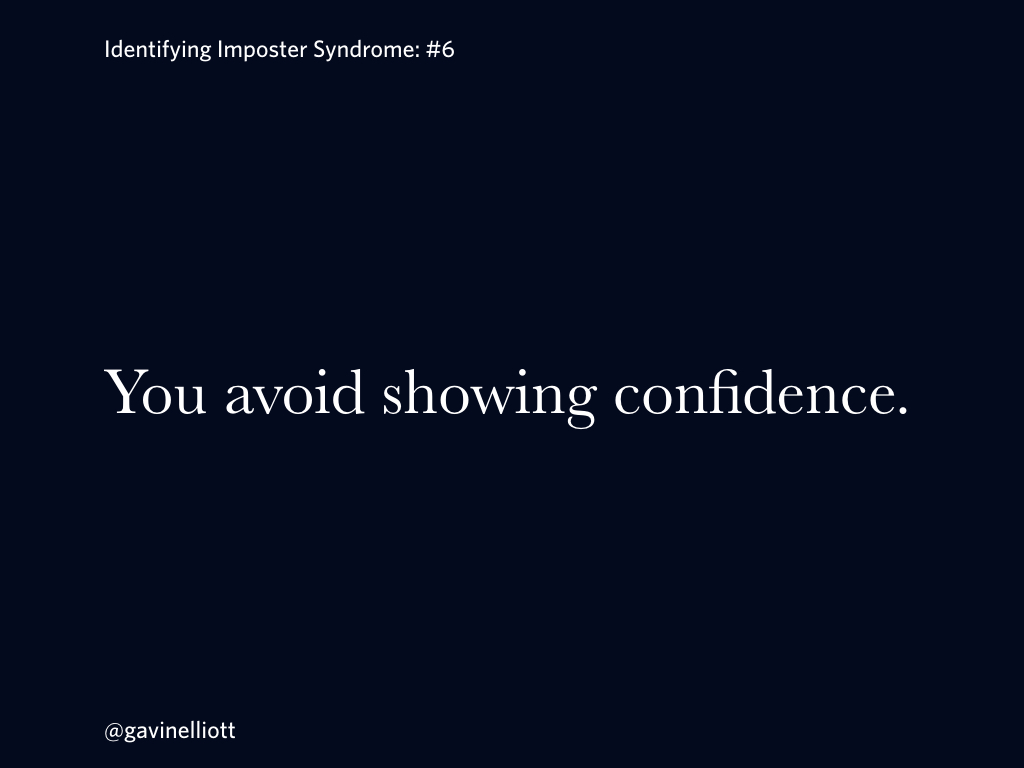 One of the most common traits that I’ve seen in those that suffer from impostor syndrome.

There’s a fear of showing confidence, in that doing so could come off as cocky or in-turn you’re asked questions that you may not know the answer to which then perpetuates the cycle once more.

Everyone else is doing fine 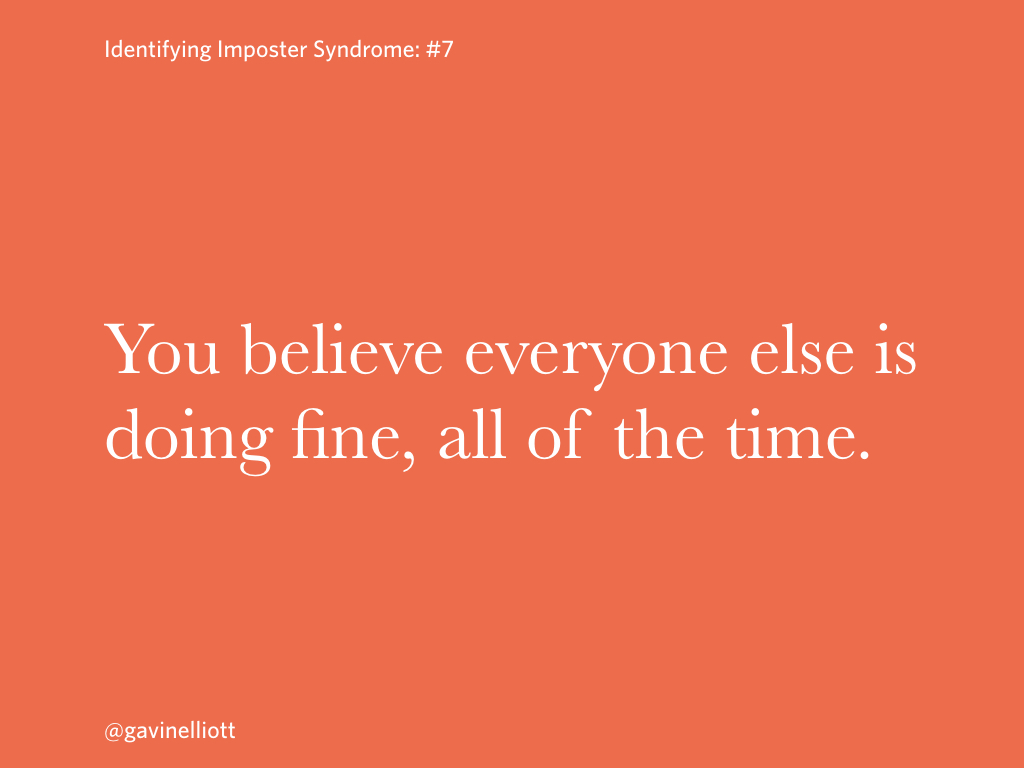 The voice in the back of your head is telling you that everyone else is doing perfectly fine in life, thus everything is wrong with you. You’re not that good and everyone else is better than you are. 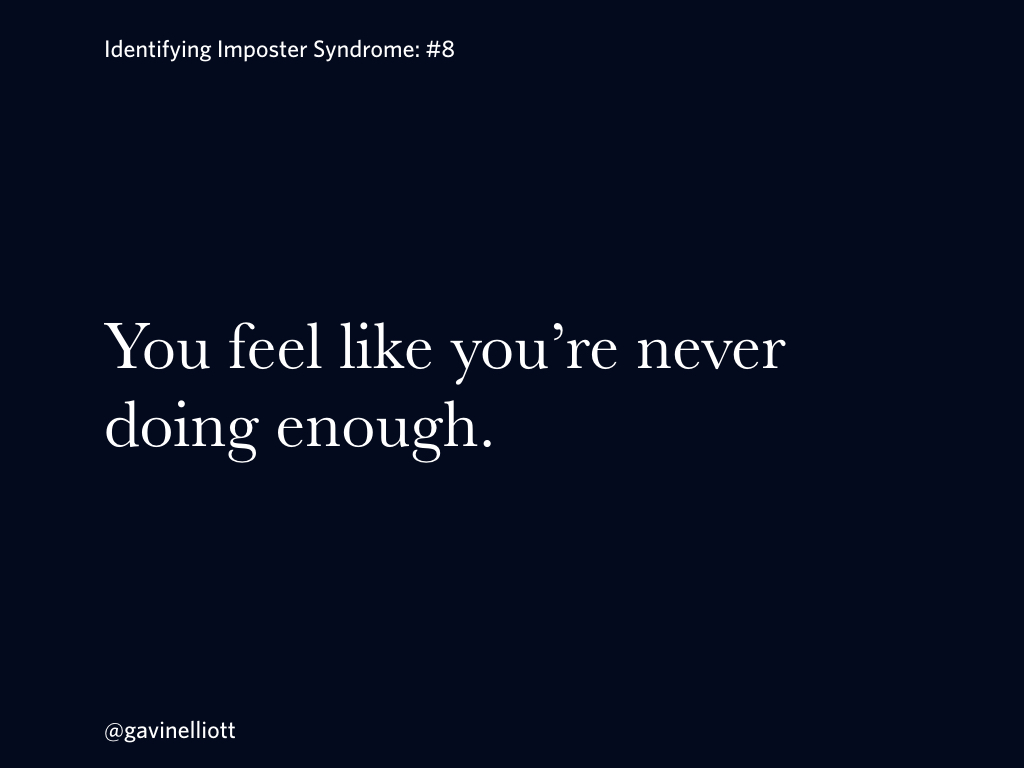 You feel like you’re ever doing enough and you believe everyone else around you is thinking bad of you for that reason. 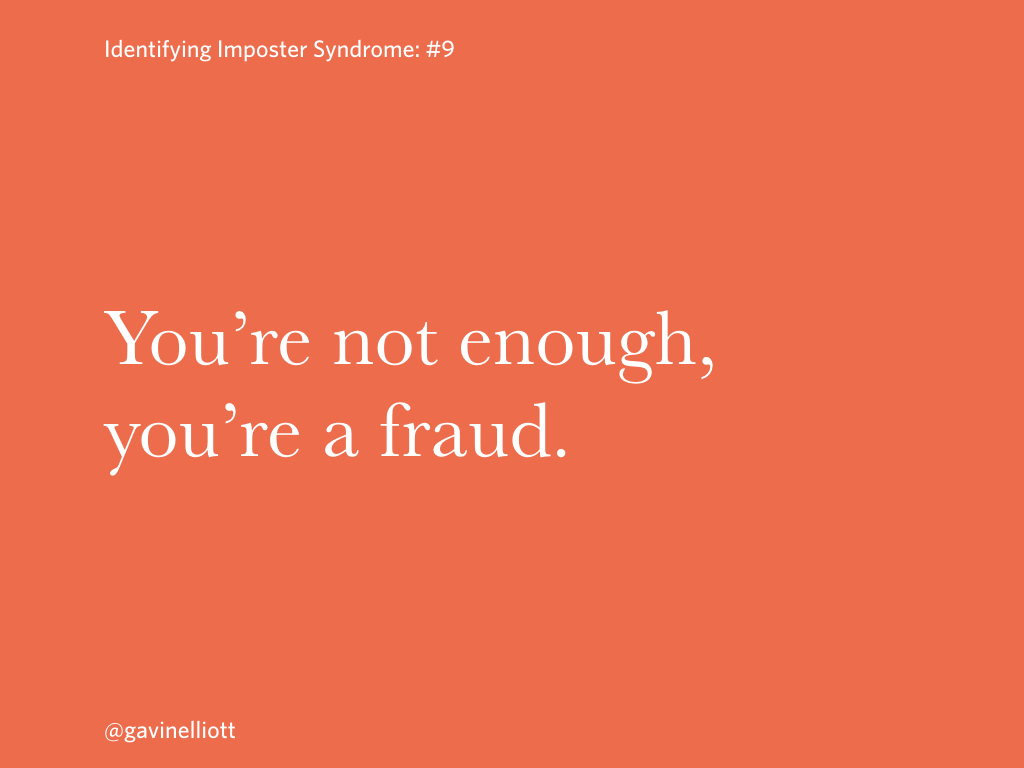 When all of these things are mixed together, you’ve got the result of being convinced that you’re not enough and you are that fraud.

What do I know?

I wouldn’t be able to go into this much detail about something so personal if I didn’t feel like I could add value somewhere in your lives without any experience. I’ve been through it.

I believe I suffered from impostor syndrome, not just slightly, but I was completely overcome by it. It still sometimes niggles in the background, but far less than it ever did.

To tell you more about my impostor, I asked a number of people to add 3 different words to describe me to an anonymous form. These were people who I’ve known for many years. At some point, they’ve been colleagues or personal friends.

This is what happened. 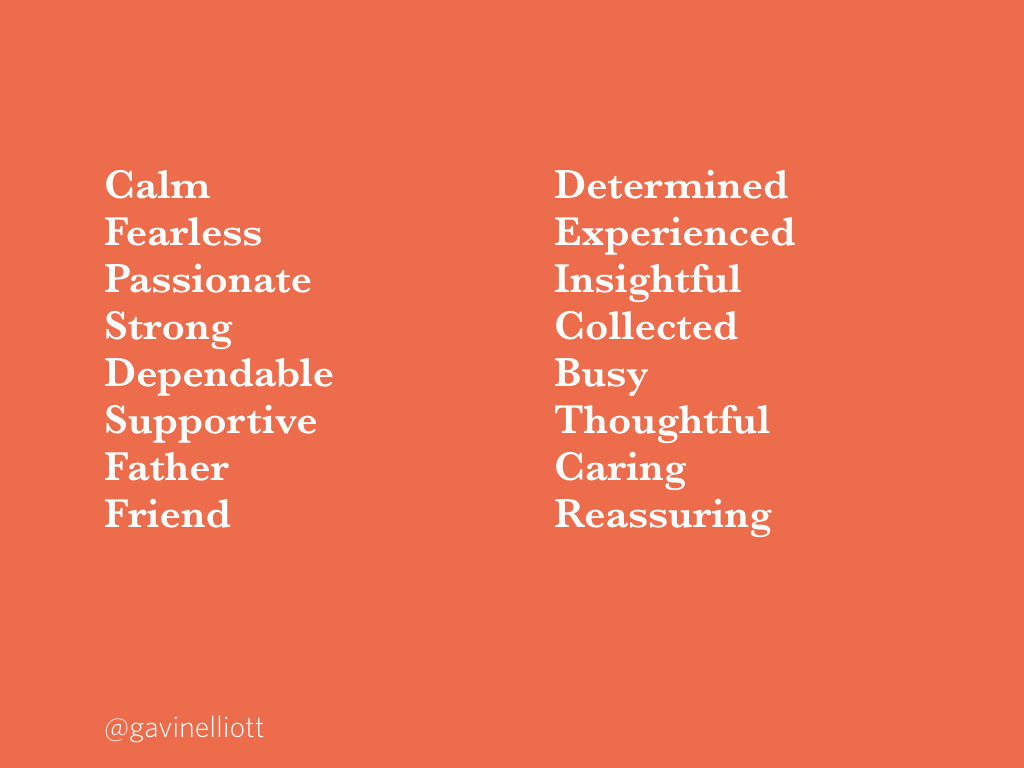 The results made me smile. Of course, they would.

But let me tell you about my impostor’s view on those words. 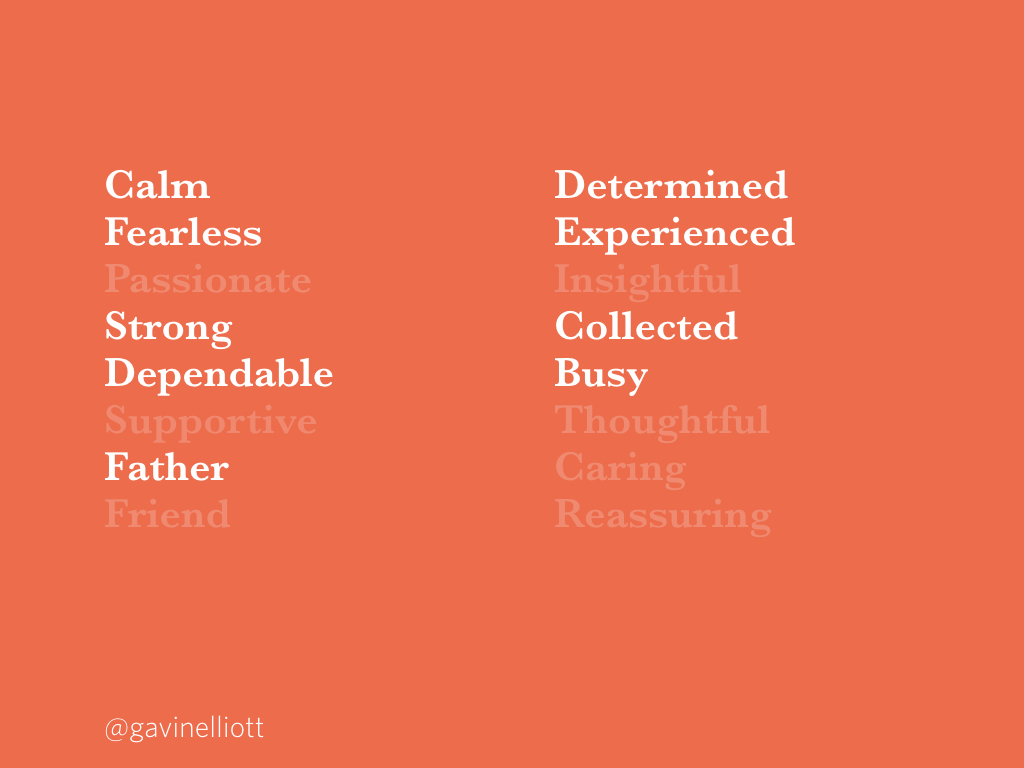 Calm To the outside world, I would be calm, wouldn’t break a sweat. On the inside, my imposter would be in an absolute panic and be getting uptight and agitated.

Fearless
To the outside world, I would be fearless. My imposter would hold me back every step of the way “You can’t do that, Gav. You’re not strong enough or good enough to do that.” You would not believe the amount of strength it took me to do some things. It was exhausting.

Strong
To the outside world, I would be strong. On the inside, I’d be an emotional wreck which manifested itself in the worst of ways. You’re acting strong, but you’re actually very sad, there are only one of two ways that can go and both are bad.

Dependable
Of course, I was dependable. If I was anything less than I was a failure. I was worthless to the people I was working with or for. I focused on being too dependable, at work to prove a point and at home for the completely wrong thing.

Determined
A yes guy. I had to portray that I was determined, again, anything less and there wasn’t any point in me being around.

Collected
On the outside I was together, I could hold my own. My impostor had me running around chasing my own tail. My to-do list was 19 pages long and I could only put a line through 3 things in a day.

Busy
I had to show I was busy. My impostor told me I had to. If I wasn’t busy then I wasn’t good enough. I had to always do more, no matter if I was on my death-bed, fresh out of an operation or even when my Dad passed away in early 2016. The guilt I felt for not working days after my Dad had died was catastrophic.

But why should WE attempt to combat impostor syndrome, especially in the workplace?

In our industry, our teams are made up of the most intelligent and talented professionals we’ve ever had the pleasure of working with. I don’t want any of us to do ourselves a disservice in thinking we’re not good enough to be there. I want to provide us all with the confidence we rightly deserve.

Combating impostor syndrome will benefit our personal and professional development, providing us with a higher degree of confidence and the ability to communicate more effectively.

Here’s how to start…

Yep, I said it. That’s the one that people say “oh, fluffy bullshit…” too.

Self-awareness is having the conscious knowledge of your own character and feelings. This is the one thing that will enable you to tell every impostor syndrome trait to go away. Once you’ve figured out ‘you’, that’s all that matters.

We need to provide ourselves with the time for introspection, the time to assess ourselves.

By providing ourselves the time, we can start recognising our shortcomings.

If you’re finding it hard to start, here’s an idea. If you work in a company or organisation you may do mid-year or end of year reviews. As part of this, you may do peer reviews. If you do, give those peers the permission to give you all kinds of feedback, including the feedback that is hard to hear. By doing this, we can get valuable insights into our own behaviours. Let your guard down, invite the feedback in, give people the permission to do so.

Figure out who we are, don’t apologise for who we are, then become even greater at who we naturally are.

Be your own best friend

Would your friend give yourself as much shit as you do? NO!

We need to stop fearing ourselves.

My pathway to happiness

The moment I started to understand myself, recognise my shortcomings and accentuate my strengths my impostor syndrome began to dissipate.

I’m aware of my shortcomings. I don’t try to do everything within my power to prove to everyone else I’m perfect because it’s exhausting and I can put my energy into my strengths.

Don’t let impostor syndrome stop you from reaching your ambition…

There is help out there. We needn’t suffer anymore.

Remember to be your own best friend.

If you’d like me to speak at your event, get in touch.